Posted On 7 years ago
2 Comments

Water security was high on our agenda for our homestead, so drilling a water well to provide us with all of ‘God’s Home Brew‘ we will need in the future is an essential part of the development.

During the dry season of 2016 on Koh Chang we ran out of water too many times to count. This resulted in us buying in trucks of water to replenish our needs. We were not the only ones and before the dry season gave way to the rainy season, it was getting to be a very worrying situation.

This lack of water security was mentioned in one of my previous blog posts as a pet peeve, but unfortunately it’s a growing trend, but one we can prepare for now. You can find out more about water security in Thailand here.

The water quality was also getting very bad on Koh Chang. So bad that after showering, we had to shower a second time just to get rid of the smell 555.

The Cost of Drilling a Water Well in Thailand We started to research for a company to drill a water well in Trat province by approaching our neighbors.

As it turned out, our closest neighbor sank a well 40 years ago and has never used government water in all the passing of time since.

We found a local drilling company; Trat Boonprasit Ltd., PART who made a site visit. They quoted 80 thousand Baht to drill but if they didn’t find water, the bore would only cost us 10,000B. 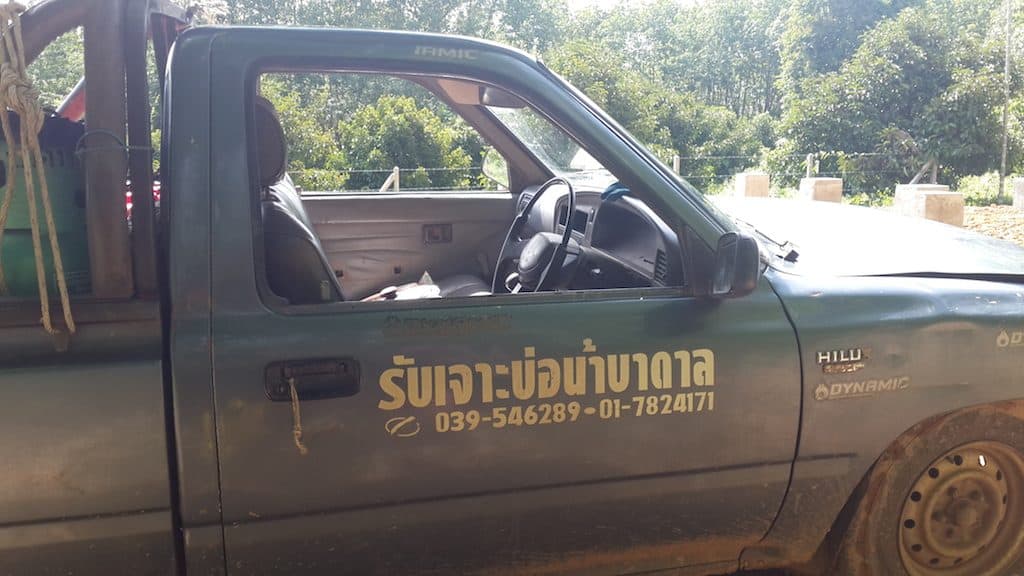 The 3 man crew and drilling rig arrived on site a few weeks later and started the drilling process. The first bore wasn’t favorable.

The rig was re-positioned and drilling commenced a second time. At 37 meters we struck gold, or rather we found water.

Pipes were sent down to line the bore hole and a pump was installed before the well was capped off. Total cost was 55,000B. Water on the Brain

The local drillers have been in the game for 20 years and they know the area and if they would hit rock, salt, hard or soft water. On Koh Chang alone they told us they had drilled over 1000 wells in 20 years. I believe that’s why Koh Chang has no water now, it’s full of holes, 55!

Once they found water the chief driller would taste the water. They hit an aquifer but it didn’t pass the taste test, so they doubled down until they hit a sweet spot with a high quality water supply.

The price of drilling appears to be dependent on the lay of the land hence we were quoted 80K but only paid 55K (this included the first bore at 10K). If we were lucky on the first attempt, the bill would have only been 45K. Boom! At the time of writing we are still in the middle of construction on the site but have provisions for 2 x 2000L storage tanks of water pumped directly from our well.

We also have government water as a back up, but like our neighbors don’t intend to use it. Hopefully our well will provide us with all our water requirements and will be ideal for all those cups of tea I plan on drinking in my old age. Support us by buying some stuff from our store… or the chicken is dinner!

The Shipping Containers Have Landed

The Best of Koh Chang and Some Pet Peeves